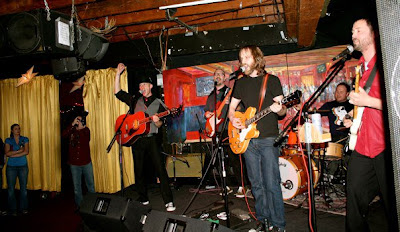 This past Saturday saw the full-scale invasion of Ballard’s ever-popular Sunset Tavern by Half Acre Day and a horde of revelers with checkered and crossed pasts, said pasts mostly including Issaquah High and Central Washington University.

The super-secret event – dubbed Sunset Blackout 2 – Electric Boogaloo – was by all accounts the rare sequel that surpasses the original. There are pictures.

We were there. We played some sets. We drank some liquor. We shook some booty. We enjoyed ourselves immensely. A big thanks to Trent and the rest of the Sunset Blackout gang for having us, and we hope to see y’all next year. It’ll be sweet 2 3peat.

Itunes finally caught up with us, and the new Hug Point single is available for download. Get it here.

Haven’t heard it yet? Listen to all the Lunar Singles released so far this year (Hug Point, Multiply and Skeletons) on Half Acre Day’s website.

And oh yes, The next song is in the final stages of production in preparation for it’s May 14 release.

Special note to our friends east of the Cascades! We’ll be returning to our favorite Central Washington haunt – the Yakima Sports Center – on Saturday evening, May 1.

Housed in what was a century ago a house of ill repute, the YSC is now the music Mecca of the area – a kickass venue, bar and eatery run by some of the finest folks in the business (the music venue business, sillies, not the house-of-ill-repute business). 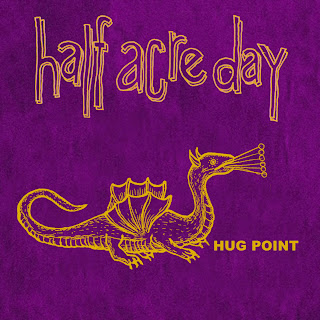 Song #3 of the 12 monthly Lunar Singles releases is officially on the loose. “Hug Point” is a positively lovely little number destined to become a HAD fan favorite.

Don’t believe me? Listen to Hug Point at Half Acre Day’s site. Brag to your friends that you were the first. Even if you weren’t, who’s gonna know? Your cat, or perhaps some dear departed loved ones (all of whom are watching your every move, by the way)? No matter. The important thing is that they won’t be telling anyone.

When your release schedule is synchronized to the movements of celestial bodies, timing can be a challenge. That said, iTunes – which is apparently not iTuned to such arcana – is lagging behind a bit on getting the song up for download.

Happily, Amazon is on the ball. You can get Hug Point at Amazon.com right now. At less than a dollar, even.

Its lack of awareness of the Lunar Calendar notwithstanding, I myself remain and iTunes man. As soon as it becomes available there, you can bet we’ll be getting the word out. Shoot, it might have already happened. Check on HAD’s iTunes place to find out. If nothing else, you may find a trove of undiscovered aural delights from the band.

If you like Hug Point, or any other works by those roguish devils in Half Acre Day, please consider posting a review, comment, blog, twitter, handbill or bathroom-stall-carving to that effect on the media outlet of your choice. Oh, and you should totally be our fan on Facebook. We do this kind of stuff all the time.

Here is something fun for you to do:

We in HAD are just pleased as punch with this development, which for any recording artist is many months in the making; first you gotta make an album. A REAL album – you know, all shrinkwrappy with liner notes and a barcode and all that – and get it up for sale on Amazon; then you submit some MP3s via email to the Music Genome Project.

You wait for so long, in fact, you forget you were waiting.

But you have to wait because your music is queued up with thousands upon thousands of other submissions to see if it is even worthy for inclusion in the library. If they deem it so, Pandora contacts you directly with instructions on sending your physical CD. These instructions must be followed to the letter and involve printing, cutting and sticking things to other things. If you screw up any of these steps, it seems, the whole process collapses and it’s game over, man. (I myself was paralyzed for several days before sealing and sending the package because I wasn’t sure if the padded envelope I was using qualified as a “CD Mailer,” a term used several times in the instructions. Eventually, my lovely wife got tired of the package sitting there, so she swiped it, sealed it and dropped it in a mailbox. “Oh no!” I thought, “It wasn’t in a ‘CD Mailer’!” But it was too late.)

You have to wait because now your whole album has to be listened to by a highly trained actual musician in a process that takes 20-30 minutes per song. But eventually, your music shows up on Pandora Radio, each song having been assigned 150-or-so “genes” describing its musical character. Using this information, a little dark magic and some nerdy thing called a “distance function,” Pandora constructs an awesome radio station of stuff you like based on the name of one song or one performer.

So yeah! Get over there and make your HAD station. I did. Who’s showing up on the playlist so far? Cake. Grandaddy. Maximo Park. Matthew Sweet. Plus a bunch of cool stuff that I’ve never heard before.

‘Cause that’s the whole point, ain’t it?

The next hunk o’ HAD is poised, panther-like, for it’s April 14 leap onto its unsuspecting prey – which are you.

Perhaps you’re thinking hey! I don’t care to be eaten by a panther, thanks! But wait! …this is one panther by which you really will want to be eaten, because it is an awesome panther.

I don’t want to say too much and spoil the mystique of it all, so I’ll just sum up:

Can’t wait? Tide yourself over and download the first two Lunar Singles. Haven’t even heard them yet? Listen here. 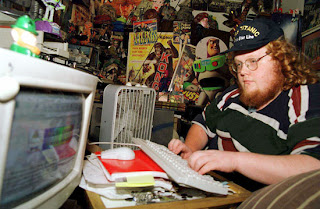 We’re all familiar with the archetype of the Sci-Fi Ultra-Geek. Lonesome. Overweight. Pungent. Never kissed a girl. In their 30s and living with their mothers. Bitter about George Lucas. Furiously tapping out hyper-critical blog comments against works they secretly wish they had done themselves.

We in Half Acre Day have officially entered this strange world, and from where we’re sitting, it’s everything it’s purported to be and more.

Last night, Viso Trailers – one of the most popular YouTube Channels out there – published two teasers for the upcoming no-budget sci-fi film/awesomefest Project London, both of which feature Half Acre Day tunes.

This little development put PL is the sandbox with the big kids. Within a few scant hours, each clip had more thousands of views, and the nerd comments were flying like +2 magic missiles.

No sir, you can tell who the real deals are, their posts blossoming as they do with pure vitriolic poetry . A small sampling below, [sic] throughout [and I couldn’t resist commenting in brackets.]:

“this is to sci fi movies what red alert 3 was to 21th century strategy games… for those who dont get the analogy red alert 3 looked worse than its predecessor﻿ which was done almost 10 years b4 it” [Thanks for the history lesson, but the real lesson here is to go outside more often.]

“‘and we’ll all end up as ammonium﻿ chlorine’…basic chemistry fail.” [A jab at Yours Trulies’ intentionally obtuse lyrics. Ha on you, commentor, ’cause actually I got a D in basic chemistry. But only ’cause I was totally making out with my totally hot lab partner the whole time. And also your mom.]

“This looks like one of those cocky little indie movies that thinks it can generate lots of hype with it’s off kilter style and become a big hit. Too bad I don’t give a shit. If you can’t﻿ come up with a coherent trailer that explains a story and just gives me sub-par special effects to the tune of shitty new age pop/rock bullshit, expect me to sneak into your movie at best, and only stick around for the half of it.” [Downs another handful of girl-repelling Corn Nuts.]

Now don’t get me wrong… truly, I kid. Science fiction is the bee’s knees, if you ask me; the iconography of the genre has a big pull on me as an artist and songwriter, which is probably part of the reason the filmmakers approached us in the first place. That and the fact that we, like them, are odd.

And more than anything, I’m jazzed to see so many adorable dorks incensed by 90 seconds of weirdly fascinating footage. Man, this is gonna be good.

See for yourself, and join the fun:

Half Acre Day is playing at the Mix in Seattle Friday night, Apr. 2. The Mix – a funky lounge/art gallery/music venue in the equally funky Georgetown neighborhood.

You should totally come out, and not just to see us… seems like anyone who ever goes to the Mix L-O-V-E-S it and wants to marry it. Don’t take my word for it: Look what they’re saying about it. Look at the pictures, for crying out loud (reading is for nerds, Poindexter)!

We’re “headlining,” a nice-sounding way of saying “going on last.” But with only three bands, we’ll be taking the stage probably around 11. That’s not even lunchtime in some places.

Other reasons to come include: