Much good news! Multiply, the second of the Lunar Singles, is in the can and ready to drop on the 15th of March. The Ides of March, no less… and trust us, this one’s ready to stab Caesar in the groin.

Meanwhile, Spiral Productions – our new BFFs and genius makers of the soon-to-be sci-fi film classic Project London, is finishing up a 90-second teaser for the movie set to Multiply’s head-bobbin’ strains.

In other news, Half Acre Day’s latest album, Fourteen Trips Around the Sun, has passed muster with the discerning musicologists at Pandora Radio and will soon be available there. Get ready to build that HAD station.

If you haven’t already, go now and listen to Skeletons, the first single we released on February 14. Ain’t never too late to fall in love. 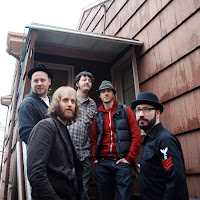 Bunches of new pixx from our last Croc show, and then some.

In our secret underground lair, the pungent aroma of decision-making wafts. The second single in the cycle has (pretty much) been agreed upon. If Dusty – who is currently wandering the wilderness – disagrees and does not have a really compelling reason for doing so, we will fall upon him and feast upon his innards.

We’re not naming names… not yet. You’ll just have to wait and see. March 15, baby. Beware the Ides and like that.

However, we will say that talks with our film phenom friends at Spiral Productions – makers of the upcoming independent sci-fi flick Project London – have revved up to, like, a hunn’rd. Producer Phil McCoy (who actually has the word “philm” IN HIS NAME), informed us that they are quickly closing in on the movie’s release.

We’ve been privileged to witness some eye-popping footage from the movie, set to the rocking strains of none other than Half Acre Day.

And we are officially stoked.

This is but a wee example, featuring the song Astronauts by Half Acre Day, (which are us… follow along).

A “no budget” sci-fi film made by raving genius madmen and madwomen from all corners of the globe, Project London, we firmly believe, has the potential to change the way movies are made, marketed and released.

And the soundtrack? Mmm Hm. It’ll be heavy on the Half Acre Day, including some brand new tunes you won’t find anywhere’s else.

This movie is gonna blow the doors off Hollywood’s machine. I mean, big fat Tinseltown producers will be weeping like kindergarteners. They’ll have little spots of pee adorning the fronts of their thousand-dollar pants. Because it’s our movie and they can’t have it.

More on that to come.

How about that. Our new song “Skeletons” is out and it’s got its very own video already.

Then say you love it and
watch it again.

David Bowie night at the Croc – The sold-out Dancing on the Valentine Leukemia/Lymphoma Society Benefit. This was probably “Hang on to Yourself.” The cause was good and the vibe flat-out sublime. Gratitude and congrats to all.

The Lunar New Year is upon us, and with it the release of the first song in the cycle, Skeletons.

Get it for your very own.

We’ll be letting our “Skeletons” out on Feb. 14, the Lunar New Year 4707 and dawning of the year of the striped big cat. Meantime, come and listen to the song. Then let us know what you think.

This is just the beginning. We’re releasing a single every month for the coming lunar year. Stay in the loop on the release cycle. Friend us.

halfacreday.com has just been relaunched with new music and a new look. Come see it, listen to some tunes, and follow our new blog.

Skeletons, the first official release of Half Acre Day’s Lunar Singles, is online. Listen to it now.

The song is already getting some terrestrial radio love from Seattle’s KEXP and others across this great land.